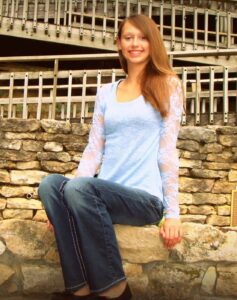 After a few busy months, University of Iowa Graduate Student Abigail (Abi) Lippert’s time at West Wind has drawn to a close. Abigail worked on a multitude of projects during her semester of practicum at West Wind, and we’re excited to see where she goes next.

Originally from Mediapolis, Iowa, Abigail came to Iowa City to pursue her undergraduate degree. Her initial goal was to become a doctor, but she found herself drawn to psychology and social work as she explored how she could best impact the social injustices she saw around her. “Once I got into psychology, I started learning a lot about supporting students and individuals who have different abilities,” she said.

Abigail became interested in how different groups are impacted in the school setting, specifically through implicit bias. Her desire to learn more led her to explore a practicum with West Wind, where she supported implicit bias trainings through research, development, and engagement.

According to Mandi Bozarth, one of Abigail’s colleagues and supervisors, Abigail brought an ability to to reflect on and analyze her role and her own race throughout her work — including how it impacted research, material development, and engagement with staff. “It can be really daunting for some people,” Mandi said. “But she brings that lens to every piece of work she does.”

Some of the projects Abigail worked on at West Wind include research on disproportionality, supporting participants through implicit bias trainings, and building out the Educational Equity Resources Portal.

Although Abigail’s time at West Wind has ended, she hopes to carry many of the skills (and people!) with her as she moves forward.

“Everyone has been so great to work with … so helpful, so understanding,” she said. “I’m very lucky to have found a place that has been really supportive of me taking care of myself.”

After graduating, Abigail hopes to work directly with students; ideally, she hopes to one day point educators to the resources she helped create while at West Wind. We at West Wind send good wishes for Abigail’s continued journey!